What's your score for 'Celebration'?

Do you have a review or comment for 'Celebration'?

The Star Wars Celebration Episode IX panel has just finished and after an entertaining 1 hour 20 minutes of director, producer and stars the title was shown during the first trailer as Star Wars: The Rise Of Skywalker. 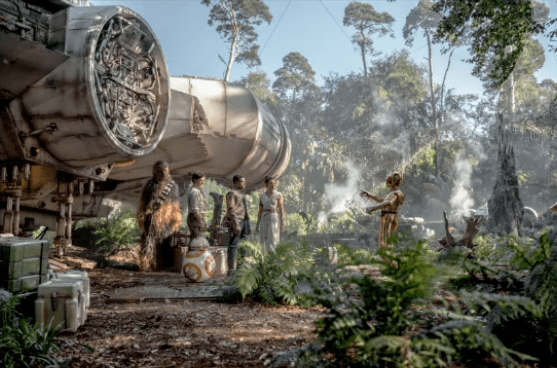 The title brings up more questions, and maybe as widely reported its not the very end of the Skywalker saga, and just maybe we'll see that Luke character one last time.

The end of the trailer has a rather special surprise and brings the whole saga full circle, and ties all the trilogies together quite nicely.

The nods to the original trilogy are rather special in this trailer, thats what happens when you bring on a life long fan to write and direct.

Check out the trailer below, and a new poster is sure to follow, although it looks like the leak from last week may be the teaser poster.

We're all waiting for Star Wars Episode IX like its the end of the world and today marks a step closer as JJ Abrams the directer of said film Tweets that they have finished filming.

There is now 10 months to edit the film, add the special effects, do any reshoots and get the film ready for its December 20th release date.

In the mean time there is the movie poster to see, a title to announce and of course the trailer to finish and release which we should see during Star Wars Celebration in April.

In the mean tile check out the tweet below.

It feels impossible, but today wrapped photography on Episode IX. There is no adequate way to thank this truly magical crew and cast. I’m forever indebted to you all. pic.twitter.com/138AprtFuZ

Plenty of stuff to sink your teeth into with the first trailer for Star Wars The Last Jedi.

Watch the trailer below and lets start guessing the story of Star Wars The Last Jedi.

There is still no stopping the live action Beaty and The Beast as it holds off Scarlett Johansson in Ghost in The Shell as the manga adaptation debuts at number 2.

On its third weekend at the top of the UK box office Beauty and The Beast takes £6.7 million, yet again another excellent weekend gross.

This brings the films total gross to a fantastic £51 million over its 3 week UK release and by far makes it the top film of the year.

Making its debut in second place this week is the live action adaptation of the 1996 Manga film Ghost in The Shell.

Taking a relatively good £2.3 million the film has done well, but with the hype and mainly positive reviews we could have been looking at higher.

Maybe the film will be a slow burner and with many teens on Easter holidays this could do well over the coming weeks.

I'm sure its not escaped your attention that the top 2 films this week are live action versions of classic animations.

Also new this week is Smurfs The Lost Village at number 3 with &pound1.3 million, this film will do well in the next couple of weeks and could challenge Beauty and The Beast for the top spot.

Free Fire is at number 7 and the special cinema event in aid of Comic Relief Peter Kays Car Share A Second Series Celebration lands at number 10, and it was only shown in one cinema chain.

Many long running films are not around anymore hence the longest running film this week is Logan which has been around 5 weeks while Beauty and The Beast is the top grossing movie.

A year ago
Batman V Superman Dawn of Justice stays at the top for a second weekend while top new film is Eddie the Eagle at number 2.

Five years ago
The Hunger Games spent its second weekend at the top while he top new film was Wrath of The Titans at number 2.

Ten years ago
Mr. Beans Holiday made its debut at the top of the UK box office, it knocked 300 down to number 2.

Fifteen years ago
Guillermo del Toro's franchise film Blade II was new at the top, its knocked Ali G Indahouse down to number 3 after just a week at the top.

Twenty years ago
The Star Wars special edition remained at the top for a second weekend while top new film was Dantes Peak at number 3.

Twenty five years ago
Cape Fear spent its fourth weekend at the top, it kept Freejack from making its debut at number 1, it entered at number 2.

Star Wars celebration Rogue One panel reveals a teaser reel, new footage shown and May the Force Be With You

Rogue One A Star Wars Story panel at Celebration reveals a teaser Reel.

A new poster was also revealed as well as some new information about the films story.