Hercules Films classified 12A contain material that is not generally suitable for children aged under 12. No one younger than 12 may see a 12A film in a cinema unless accompanied by an adult. Adults planning to take a child under 12 to view a 12A film should consider whether the film is suitable for that child. To help them decide, we recommend that they check the Ratings info for that film in advance. 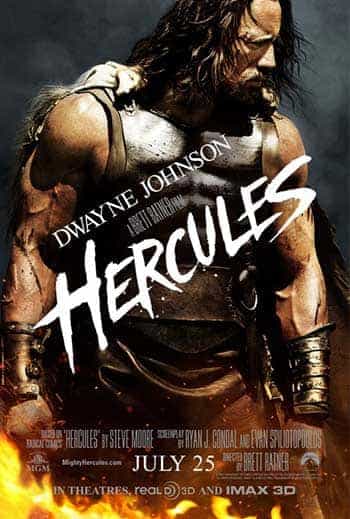 What's your score for 'Hercules'?

Do you have a review or comment for 'Hercules'?

News from around the web
Disney: Weirdest secrets you never knew about the movies  Metro.co.ukSat, 28th March 2020'I can social distance': Hit song from Disney's 'Hercules' gets a coronavirus remix  ABC NewsWed, 25th March 2020Could Disney's 'Hercules' be headed to the Broadway stage?  Attractions MagazineMon, 23rd March 2020Updates on 'In the Heights' movie, 'Hercules' musical among highlights from Rosie O'Donnell's live show  EW.comMon, 23rd March 2020Disney Plus UK: All the classic animated movies to watch on the new streaming service  iNewsFri, 27th March 2020Here's every show and movie available on Disney Plus UK at launch  GamesRadarTue, 24th March 2020

A year ago
Animated film Trolls took over at the top from The Girl On The Train which fell to number 3 after 2 weeks on top.

Five years ago
Madagascar 3: Europes Most Wanted was the top new film of the week entering the box office at number 1 while Taken 2 fell to number 3 after 2 weeks on top.

Ten years ago
Ratatouille spent a second weekend at the top while the top new film of the week was Stardust starring Claire Danes and Michelle Pfeiffer.

Twenty years ago
Hercules spent its second weekend at the top while top new film was Shooting Fist at number 2.

Twenty five years ago
The animated Beauty and The Beast spent its second weekend on top while top new film Strictly Ballroom entered at number 2.

With the slow box office of Blade Runner 2049 the UK chart sees a new number 1 in the shape of The Lego Ninjago Movie, but it was a battle for the top.

Its the third movie based on the lego franchise and each one has made its debut at the top, but The Lego Ninjago Movie has done so with the lowest opening.

With £3.6 million there is the feeling that the general public are starting to get used to seeing the Lego franchise on the big screen and are maybe waiting for home video before watching.

Regardless this is still a number one film and with a sequel to the original Lego Movie coming soon you can imagine that being a box office hit as well.

Blade Runner 2049 falls from the top to number 2 this week, but with a £3 million weekend it fought hard to stay on top.

The full week gross was £6.1 million so it easily was the top film of the week, the total gross currently sits at £12.1 million.

Also new this week is The Snowman at number 3 with a weekend gross of £1.3 million and Botoks is new at 5 with nearly £0.8 million.

Despicable Me 3 has now been on the box office for 16 weeks and has a total gross of £47 million.

A year ago
The Girl on the Train stays at the top of the box office for a second weekend while Inferno starring Tom hanks and directed by Ron Howard is the top new film at 2.

Five years ago
Liam Neeson and Taken 2 hold onto the top spot for a second weekend while the top new film was Hotel Transylvania at number 2.

Ten years ago
Pixars Ratatouille was the top new film of the weekend at number 1 while The Heartbreak Kid fell from the top to number 3 after just 1 weekend.

Fifteen years ago
The last of the Hannibal Lecter films starring Anthony Hopkins made its debut at the top of the UK box office while Disney's Lilo and Stitch fell to number 2 after a week on top.

Twenty years ago
Disney's Hercules made its debut at the top of the box office knocking The Full Monty down to number 2 after 6 weeks at the top.

Twenty five years ago
The original animated version of Disney's Beauty and The Beast made its debut at the top while Patriot Games fell to number 3 after a couple of weeks at the top.

The inbetweeners 2 takes hold of the video chart number 1 spot on it's debut week of release pushing Guardians of The Galaxy fro the top to third.

The second Inbetweeners movie was released in cinemas on 8th August this year when it broke records by having the highest first day gross for a comedy, it took £12.5 million over it's debut weekend.

It saw a couple of weeks at the top, but had a very front loaded audience as the film only spent 6 weeks on the chart, but it grossed £34.6 million in the process.

In comparison the first movie of the series was on the box office for 9 weeks and took £45 million.

The Inbetweeners 2 is the 56th highest grossing film in the UK, it's not been released in the US yet.

Frozen this week goes back up to the number 2 spot, there is simply no stopping this films sales.

Other new films include Hercules and Planes Fire and Rescue.

Selling well on DVD and Blu-ray this week, Rio 2 makes it's debut on the home entertainment chart at the top, removing The Lego Movie after it's spell as the top seller.

Rio 2 hit the UK box office during the Easter holidays this year making it's debut on the chart for April 4th, it debuted at the top with a opening weekend gross of £2.8 million.

Over a fantastic 12 week run at the UK box office it went on to a total gross of £15 million and is the 266th top grossing film ever in the UK.

On the world stage it has made $473 million making it the 135th top film ever. Compared to the first Rio film it outperformed it but only just.

With Rio 2 at the top and The Logo Movie at 2, Noah falls to 3 this week and Frozen holds steady at number 4.