What's your score for 'John Wick'?

Do you have a review or comment for 'John Wick'?

Entering at the top of the global box office this week Monster movie Godzilla: King Of The Monsters which leaves Aladdin to have a single week at number 1 (so far) as it falls to number 2 in its second weekend.

Godzilla: King Of The Monsters

The big monster battle movie starring the Japanese superhero Godzilla fights its way to the top of the global box office this week, and does it with some ease.

Taking $179 million from 76 countries on its debut it may be at the top of the global box office but compared to the previous Godzilla movie released in 2014 it way below.

Godzilla is having a battle with King Kong early next year so in comparison this film is also lower than 2017's Kong: Skull Island.

The Disney live action blockbuster flew to the top of the box office last weekend but sinks to number 2 this week with $120.6 million from 55 countries.

This pushes the film total global gross to $445.9 million after 2 weeks of release.

With the films release across more of the globe the Elton John fantasy bio-pic goes to number 3 with a weekend global take of $44.2 million having expanded to 41 countries.

The film now has a global total gross of $56.2 million, in comparison this is far below the second weekend gross of Bohemian Rhapsody.

At number 4 this week is Chinese film Parasite which makes its global debut with $24.5 million from just 2 countries.

The third John Wick movie falls to number 4 this week with a gross of $23.8 million from 78 countries, this pushes the films total global gross to $221.6 million.

World Box Office Analysis 24th - 26th May 2019: Live action Aladdin soars to the top of the box office on its debut weekend

Disney continue their remaking, and updating, of classic animations with a live action version of the 1992 Aladdin which easily tops the global box office on its debut weekend.

Starring Will Smith and Mena Massoud and directed by the underated British director Guy Ritchie the Disney film tops the global box office with $207.1 million.

this is far better than expected and although not as good as the Disney remake of Beauty And The Beast sits up there with the best of the recent run of live action films.

After the film got criticised after the first trailer, especially Will Smith's Genie, there were fears it would bomb, but critics and audience have likes the film and the box office future looks promising.

After a very successful opening last week the Keanu Reeves starring film falls to number 2 this week with $49.1 million over the weekend.

This pushes the films total global gross to $175.3 million and the biggest John Wick film.

The live version of the Nintendo creatures falls to 3 this week with $37.6 million pushing its total gross to $352.9 million and by far the most successful Pokémon film so far.

The Marvel movie falls to 4 this weekend with $32.2 million which pushes the films total global gross to $2.7 Billion.

Its starting to look less like the film will beat the $2.78 Billion of Avatar but there is still hope and with a small push from Disney who knows.

New at 5 this week is this alternative take on the super hero story from director David Yarovesky and produced by Guardians Of The Galaxy Director James Gunn.

Starring Elizabeth Banks and David Denman curiosity has given the film a $12 million opening weekend.

UK Box Office Analysis 17th - 19th May 2019: John Wick debuts at number 1 knocking Pokemon to number 2 after a week at the top

The John Wick series of films has gained more popularity as each film has been released and this week the series reaches its pinacle as John Wick: Chapter 3 - Parabellum makes its debut at the top.

Starring Keanu Reeves the high octane action movie hits the ground running and makes its debut at the top of the UK box office on its debut weekend of release.

The film, directed by Chad Stahelski, makes its debut with a weekend gross of £3.6 million which is by far a series high.

The live action film starring Ryan Reynolds as the voice of Pikachu, which made its debut last weekend at the top falls to 2 this week with a £2.7 million gross.

This pushes the films total to a non too shabby £8.9 million after 2 weeks of release.

The Marvel mega hit falls to 3 this week but still has a fantastic weekend gross of £2.2 million after 4 weeks of release.

The film now has an amazing total UK gross of £83.9 million which makes it the fourth highest grossing UK film ever, its now £10 million behind Avatar at number 4 which it may not get to.

Making its debut at number 5 this week is the Nickelodeon TV show which transitions to the big screen and makes £521,504 on its debut.

Longest chart run this week is the live action Dumbo which has now been around for 8 weeks and has taken £24.7 million.

Avengers: Endgame gets knocked of the top of the US box office after 3 weeks by new entry John Wick: Chapter 3 - Parabellum while A Dogs Journey makes an impressive start at number 4.

The third in the John Wick series starring Keanu Reeves and directed by Chad Stahelski hits the top of the US box office on its debut weekend of release.

The film series which over time has gaines a large following beats John Wick: Chapter 2 and out grosses the first in just one weekend.

The Marvel film falls down to number 3 on its 4th weekend of release with a weekend gross of $29.4 million.

With a total gross of $770.8 million it has now taken Avatar as the second highest grossing US film with just Star Wars: The Force Awakes above it, but it is still in need of nearly $200 million which it most likely wont achieve.

The Pokémon movie falls to number 3 on its second week of release with a weekend gross of $24.8 million, this boosts its total US gross to $94 million with the next milestone in sight.

This sequel movie doesn't do as well as its predecessor A Dogs Purpose but it still manages a top 4 entry with a debut of $8 million.

Falling to number 5 is the con artist movie starring Anne Hathaway and Rebel Wilson which takes $6 million on its second weekend of release.

The film now has a total US gross of $23 million.

The longest chart run on the US box office this week has been around now for 11 weekends and has taken $425.1 million.

This weekend, Friday 17th May 2019, there are 2 new films released in the UK looking to hit the box office and challenge Pokémon: Detective Pikachu for the top spot. 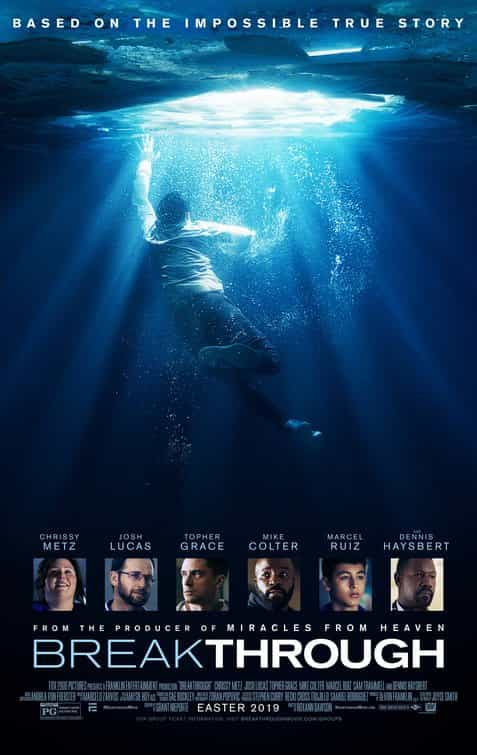 It stars Keanu Reeves who last starred in Destination Wedding and Halle Berry who last appeared in Kingsman: The Golden Circle.

Next on the new release schedule is Breakthrough, this new movie stars Topher Grace and Josh Lucas.

The film is brought to us by new director Roxann Dawson.