Planes A U film should be suitable for audiences aged four years and over, although it is impossible to predict what might upset any particular child. 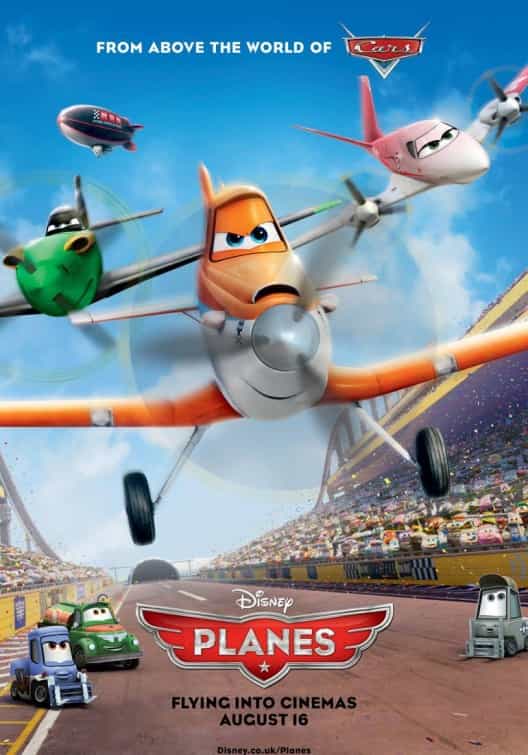 What's your score for 'Planes'?

Do you have a review or comment for 'Planes'?

The inbetweeners 2 takes hold of the video chart number 1 spot on it's debut week of release pushing Guardians of The Galaxy fro the top to third.

The second Inbetweeners movie was released in cinemas on 8th August this year when it broke records by having the highest first day gross for a comedy, it took £12.5 million over it's debut weekend.

It saw a couple of weeks at the top, but had a very front loaded audience as the film only spent 6 weeks on the chart, but it grossed £34.6 million in the process.

In comparison the first movie of the series was on the box office for 9 weeks and took £45 million.

The Inbetweeners 2 is the 56th highest grossing film in the UK, it's not been released in the US yet.

Frozen this week goes back up to the number 2 spot, there is simply no stopping this films sales.

Other new films include Hercules and Planes Fire and Rescue.

No problem this week for the Channel 4 show The Inbetweeners as their second film hits the right comedy spot with British audiences and goes to the top.

The Inbetweeners 2 which debuted on Thursday did in fact the the best ever first day gross for a comedy in the UK, beating it's predecessor in the process.

The comedy hit the top on it's debut weekend and took a box office gross just a little below that of the first film, but coming in with £12.5 million it will go on to be a big hit like the first.

Guardians of the Galaxy falls to number 2 this week but still gets a very good £3.3 million taking it's 2 week total to £13.8 million.

Also hitting the Uk box office chart are:
Planes Fire and Rescue at 4
Gods Pocket at 15

Last year Alan Partridge Alpha Papa hit the top on it's debut weekend of realise knocking The Smurfs 2 right down to 7 after only a week at the top. It was a massive week for new films with 4 new releases in the top 5.

Five years ago The Ugly Truth was the new film at the top finally knocking off Harry Potter and the Half Blood Prince which fell to 3.

Ten years ago Will Smith starred in I, Robot which debuted at the top of the box office with King Arthur taking a tumble down to 3rd place.

Fifteen years ago we had a fairly static chart with Austin Powers The Spy Who Shagged Me staying at the top for a second week, the highest new film was Dougs 1st Movie at 8.

New film analysis 8th August: The Inbetweeners return for another go at the box office

This week we see the under sexed Inbetweeners going head to head with Disney trying to make cash from one of it's many franchises.

The Inbetweeners have become a pop culture phenomenon, there is no doubt, what started out as a adolescent comedy on Channel 4 turned into a £45 million grossing movie.

This week they are back for more of the same, only in Australia, and if the opening day gross of £2.75 million is setting the trend for this film then it will knock Guardians of the Galaxy from the top in style.

Make no mistake, this will be the number one film this week, it's simply a case of how much it can gross on it's debut.

Also out is Disney trying to milk their Planes franchise. One for the kids and one that should have been a video debut, Planes: Fire and Rescue will be a modest hit.

Released timely in the holidays it goes up agains How To Train Your Dragon 2 and The Nut Job, both old now, but should be a top 5 hit, if only for the familiarity and the Disney name.

Come back next week to see how well they did at the weekend box office.

Alan Partridge Alpha Papa was only strong enough for a single week at the top and this week we have, for a second week, an all new top 3 with Kick-Ass 2 leading the way.

The superhero film, the follow up to 2010's Kick-Ass, takes the top spot with a weekend box office of £2.4 million, in comparison to it's predecessor which has an early April release instead, it's over a million lower, Kick-Ass making £3.8 million on it's opening.

Also opening strong in the top 3 are Disney's Planes and the US hit 2 Guns with Denzel Washington and Mark Wahlberg at 2 and 3 respectively.

Making a massive tumble at the box office is Alan Partridge, who falls to 7 this week with £852,967 after a fairly successful debut last week.

This time last year Brave was still at the top and doing big numbers holding off The Bourne Legacy which opened in second place.

Five years ago The Dark Knight went back to the top of the box office in it's fourth week of release, the highest new release was the Adam Sandler comedy You Don't Mess with the Zohan, hairdressing at it's best!

Ten years ago American Pie: The Wedding was debuting at the top knocking off Pirates of The Caribbean: The Curse of The Black Pearl after a single week.

Fifteen years ago Bruce Willis was still stopping astroids at hte top with Armageddon while the British The Avengers (not to be mistaken with the superhero film) was the highest new film at 3.