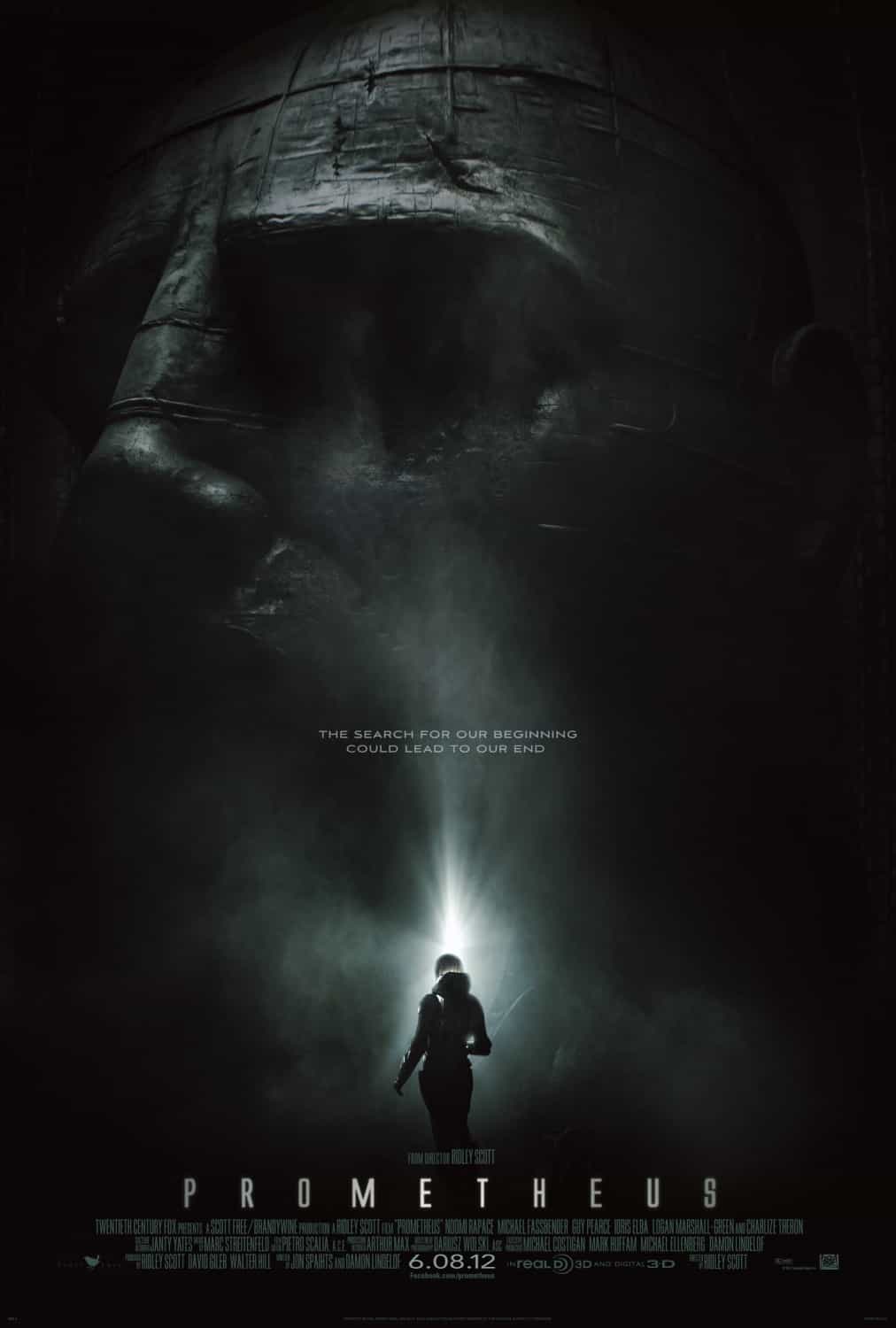 Do you have a review or comment for 'Prometheus'?

Making it a trio of weeks at the top this week Wonder Woman beats again The Mummy while the top new film is Churchill at number 5.

The DC Universe from Warner Bros. really has kicked into gear now with Wonder Woman taking £1.8 million on its third weekend of release.

This puts the films total gross in the UK at £16.2 million, although last years Batman V Superman Dawn of Justice made more it was very front loaded and by this point in its run had really slowed down.

The Mummy has done better in the UK than in other territories where it sunk on the second weekend, this week its still at 2 with £1.1 million for a total of £4.9 million.

Highest new film of the week is Churchill which enters the UK box office at number 5 with £392,732.

The film starring Brian Cox and Miranda Richardson has been praised critically but as a small independent film doesn’t get the reach of a high budget blockbuster and was only screened in 345 sites.

The film has done well to take this much and as is often the case with British film it is sure to hang around for many weeks to come.

Other films making their debut this weekend are Gifted starring Chris Evans and the Nick Broomfield documentary Whitney Can I Be Me at number 10.

Longest running film this weekend is The Boss Baby with 11 weeks on the chart while the top grossing movie is Guardians of The Galaxy Vol 2 which has now grossed £40 million in total.

A year ago
The Conjuring 2 The Enfield Case was the top new film making its debut at number 1 while Me Before You fell to number 2 after 2 weeks on top.

Five years ago
Prometheus retained the top slot for a third weekend while the top new film was Rock of Ages at number 4.

Ten years ago
4: Rise of The Silver Surfer topped the charts on its debut knocking Ocean’s Thirteen down to number 2 after a week of release.

Fifteen years ago
Spider-Man (the original Sam Raimi version) made its debut at the top of the UK box office, it knocked Star Wars Episode II: Attack of The Clones down to number 2 after 4 weeks on top.

Twenty years ago
remaining at the top was The Fifth Element while the top new film was Whoopy Goldberg in The Associate at number 7.

Twenty five years ago
The Lawnmower Man held onto the top for a second weekend with Dolly Pardon in Straight Talk the top new film at number 4.

Tom Cruise has always been a film favourite at the UK box office having scored hit film after hit film, but his latest film The Mummy which must have seemed like a sure fire hit falls at number 2 this week.

It was a very close call in the end with The Mummy pulling in £3.3 million on its debut, if you compare this to Cruises last film Jack Reacher Never Go Back it is a million higher, but compared to his last franchise film Mission:Impossible Rogue Nation it is a couple of million shy.

Despite if this means the actor is starting to loose his sure fire hit status if you compare this The Mummy to the 1999 Brendan Fraser version of the film its about equal, and that nearly 20 years ago.

Remaining at the top for a second week, and by the thinest of margins is Wonder Woman which takes £3.4 million this weekend.

This brings the films total gross after 10 days of play to £12.8 million and well on track to be one of the highest grossing movies of the year.

Also new this week at number 5 is the Live Cinema event Take That Wonderland Live From The O2 with £1 million.

With Beauty and The Beast returning to the top 15 this week it becomes once again the top grossing movie with £72 million and the longest running film at 12 weeks.

A year ago
Me Before You remained at the top of the box office for a second weekend and with a strong upper chart the top new film was The Boss at number 7.

Five years ago
Prometheus stayed at the top for a second weekend with The Pact the highest new film at 4.

Ten years ago
Ocean’s Thirteen was the new film making its debut a the top, its knocked Pirates of The Caribbean: At Worlds End down to number 2 after 2 weeks at the top.

Fifteen years ago
Four weeks at number one for Star Wars Episode II: Attack of The Clones while the top new film was Unfaithful at number 2.

Twenty years ago
The fifth Element made its debut at the top knocking Liar Liar down to number 3.

Twenty five years ago
The Lawnmower Man was the top new film at number one knocking Wayne’s World down to number 2 after 2 weeks on top.

This week the flagging DC Cinematic Universe owned by Warner Bros. got a well needed kick start with Wonder Woman that not only got a fantastic opening weekend but also got good reviews.

For a new IP starring the little known Gal Gadot a £6.1 million opening is fantastic, although Chris Pine does brings some star power and the film easily takes over at the top of the UK box office.

Compared to the previous 2 films in the series, Batman V Superman Dawn of Justice and Man of Steel it is far lower but the reviews have been far better and this film could have a good run ahead of it.

With Justice League coming on November this year it could be a good year for Warner and the DC property it so wants to be a rival to Marvel Cinematic Universe but is lacking to date.

Falling from the top to number 3 this week is Pirates of The Caribbean: Salazars Revenge, a weekend take of £2 million brings the films total to £13 million.

Worth noting is for the week Monday - Sunday Pirates of The Caribbean: Salazars Revenge would have still been number 1 with a weekly take of £7.7 million.

Also making its debut this week is Baywatch, a slapstick retelling of the 90s TV show, starring Dwayne Johnson and Zak Efron the film takes £4.6 million, not bad really but not good up against a superhero movie.

This week has Smurfs The Lost Village as the longest running film with 9 weeks while Guardians of The Galaxy Vol 2 is the top total grossing movie with £39.6 million after 6 weeks.

A year ago
Warcraft made its debut at the top of the box office on its debut, and with a whole new top 3 X-Men Apocalypse fell to number 5.

Five years ago
Prometheus made its debut at the top of the UK box office while Men in Black 3 fell to number 3 on its second weekend of release.

Ten years ago
Pirates of The Caribbean: At Worlds End spent a second weekend at the top while making its debut at 2 was Wedding Daze.

Fifteen years ago
Staring at the top was Star Wars Episode II: Attack of The Clones for a third weekend while top new film was 40 Days and 40 Nights.

Twenty years ago
On its 5th weekend of release Liar Liar Went back to the top while the top new film was Absolute Power which entered at number 2, the previous weeks top film, Jungle 2 Jungle fell to number 3.

Twenty five years ago
Waynes World stayed at the top for a second weekend with the top new film being Medicine Man at number 3.

UK Box Office Weekend 19th May 2017: King Arthur makes a slow debut but does manage to win the fight for number 1

Directed by Guy Ritchie King Arthur Legend of the Sword makes its UK debut at the top of the box office, but its an unconvincing start to its box office run.

Taking £2.5 million from the weekend the film which had a massive budget and is set to start a new series of films was expected to smash its way into the box office from studio Warner Bros.

For the director this is below the debut of his top grossing films the Sherlock Holmes movies starring Robert Downey Jnr. which both debuted in the £3 million mark.

Falling into second place is Alien: Covenant which only just missed out on spending a second week at the top with a weekend gross of £2.1 million.

This brings the films total gross to £10 million, Prometheus at this point in its run was doing very similar business so expect this to end its run with a similar £20 million+.

Also new this week is Snatched starring Amy Schumer and Goldie Hawn at number 4 with a debut of £842,000 and Colossal starring Anne Hathaway at number 9 with £150,000.

Historical Chart A year ago
This time last year as the summer season kicked into full swing X-Men Apocalypse entered the chart at the top knocking Captain America: Civil War down to number 4.

Five years ago
The Dictator starring Sasha Baron Cohen was the new film at the top, it knocked Avengers Assemble down to number 2 after 3 weeks at the top.

Ten years ago
Spider-Man 3 stayed at the top for a third weekend, top new film of the week was Zodiac directed by David Fincher at number 3.

Fifteen years ago
Star Wars Episode II: Attack of The Clones was the top new film of the weekend, it knocked About a Boy down to number 2 after 3 weeks at the top.

Twenty years ago
Liar Liar remained at the top for a third weekend while the top new film was The Relic at number 2.

Twenty Five years ago
Spending a second weekend at the top was Basic Instinct, top new film of the week was Waynes World which was new at 2.