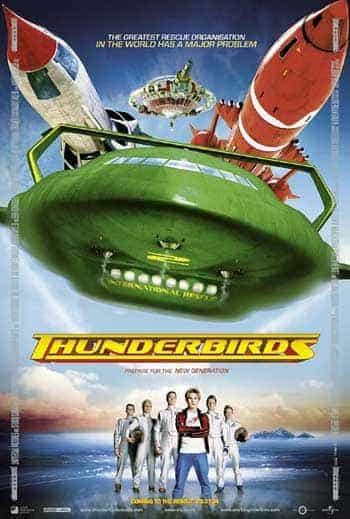 Do you have a review or comment for 'Thunderbirds'?

Dawn of the Planet of the Apes holds off the challenge of Hercules, The Purge Anarchy and Earth to Echo to keep the top spot at the UK box office for another week.

Now in it's second weekend of release Dawn of the Apes easily hangs on to the top spot with a weekend take of £3.7 million, this brings it's total gross to £17 million after 10 days of release.

Highest new film of the week is Dwayne Johnson in a retelling of Hercules, an all out action film rather than historical retelling of the Greek myth it's directed by Brett Ratner.

Hercules took a gross of £1.5 million on it's opening weekend, it has a long was to go to even be one of Johnson's best films as he's been part of the Fast and Furious series and The Mummy series.

Likewise Brett Ratner has been part of the X-Men series and directed the 2 Rush Hour movies, and also directed a Hannibal Lector film, all high grossing franchises.

Hercules could sink quite fast especially with some of the new releases coming in the next few weeks which will be ultimately bigger box office hits.

This time last year new at the top was The Wolverine based on the X-Men universe which topped on it's debut knocking Monsters University into 2nd.

Five years ago Harry Potter and the Half Blood Prince was still at the top in it's second week and The Proposal with Sandra Bullock was new at 2.

Ten years ago Spider-Man 2 held onto the top spot for a second week with the highest new film being Thunderbirds at 3.

Fifteen years ago it was Star Wars Episode I: The Phantom Menace holding onto the top spot for a second week, and with nothing daring to open up in the wake of such a big film the highest new film was Hindustan Ki Kasam at 10.