Rampage Films classified 12A contain material that is not generally suitable for children aged under 12. No one younger than 12 may see a 12A film in a cinema unless accompanied by an adult. Adults planning to take a child under 12 to view a 12A film should consider whether the film is suitable for that child. To help them decide, we recommend that they check the Ratings info for that film in advance. 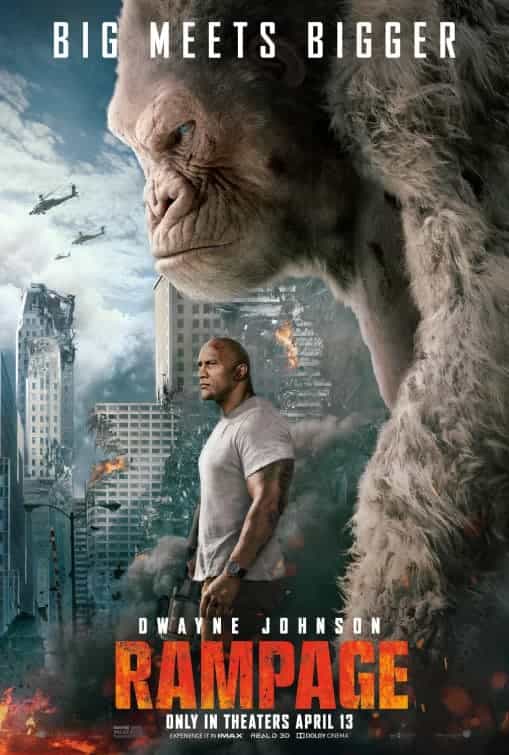 What's your score for 'Rampage'?

Do you have a review or comment for 'Rampage'?

UK Box Office Weekend 4th - 6th May 2018: Avenger Infinity War retains it s hold at the top as I Feel Pretty is the top new film

With Avengers Infinity War proving too strong to be removed from the top of the UK box office, comedy I Feel Pretty makes its debut at number 2 this week.

After its 3rd top grossing debut of all time last week the film drops by 57% this week with a weekend gross of just over £10 million.

This brings the films total gross in the UK to nearly £52 million and its now the top grossing film of 2018 overtaking the other Marvel film Black Panther.

Amy Schumer stars in I Feel Pretty which makes its debut at number 2 this week.

Maybe its a brave move to open the week after a Marvel film but the love yourself comedy takes £1.2 million for the weekend.

A Quiet Place is still doing really well for itself and this week is at number 3 with a weekend gross of £395,335 which brings the total gross to over £10 million.

US Box Office Weekend 4 - 6 May 2018: Avengers Infinity War drops over 50% but easily hangs on to the box office number 1

With the biggest opening in the US of all time its no surprise that Avengers Infinity War hangs on for a second weekend with the remake of Overboard coming in at number 2 as the highest new film.

Avengers manages a second weekend on the box office grossing $112 million, a 50%+ drop from its debut, but this does bring the film total gross to $450 million after just 10 days of release.

Coming in at number 2 is the unwanted remake of the 1987 Kurt Russell and Goldie Hawn movie of the same name.

This remake stars Eugenio Derbez and nna Faris and takes $14.7 million on its debut.

Finally at number 5 is Rampage which has now taken $84 million in the US and could be the first Dwayne Johnson film not to take over $100 million in many years.

US Box Office Weekend 27 - 29 April 2018: Mammoth record breaking weekend in the US for Avengers Infinity War which opens to $250 million+

It is with absolutely no suprise at all the Avengers Infinity War is the top film in the US (and just about everywhere) this weekend, but with the high expectation given to the film it actually outperformed.

Early estimation are coming in with a weekend gross of $250 million, which would beat Star Wars: The Force Awakens opening weekend of $248 million making it the highest grossing opening ever.

These figures are with a Sunday estimate and Disney are thinking they may have this about $5 million lower than the true figure so we could see an opening weekend of $255 million - either way it is a massive record breaking figure for the film.

Avengers aside A Quite Place drops down to number 2 this weekend, the film has done incredibly well for a low budget horror, it has grossed $10.6 million this weekend bringing the total to $148 million.

At third is the Amy Schumer comedy I Feel Pretty which grosses $8.1 million over the weekend for a $30 million total.

Rampage sits at 4 this weekend with a $7 million weekend and an $80 million total and Black Panther shoots back up to number 5 with the release of Avengers Infinity War, the film this weeks takes $4.3 million which brings the total to an incredible $688 million.

Dwayne Johnson in his monster flick Rampage managed to stay top of the UK box office this weekend in what was a very quiet window.

3 things happened this weekend in the UK which led to a very quiet time at the box office, the weather was very good, there were major sporting events on TV and nothing new really came out in anticipation for Avengers Infinity War next weekend.

This led to Rampage remaining the top film with £1.4 million which brings the film total in the UK to £6.4 million.

Climbing back to number 2 is A Quiet Place with just over a million pounds which brings the films total UK gross to &pound8.2 million.

Highest new film of the week is the Mike Newell directed The Guernsey Literary And Potato Peel Pie Society which enters at 3 with £825,777.

This mean that for the first time in a while only the top 2 films took over a million over the weekend.

Holdovers finish off the top 5 with Ready Player One at number 4 and Peter Rabbit at number 5, they have a total UK gross of £15.4 and £30.8 respectively.