25thframe.co.uk > News > Another Superhero year at the Box Office for America in 2018 with Black Panther leading the way 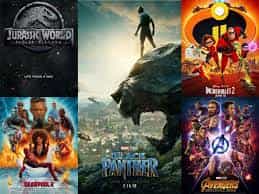