Faster No one younger than 15 may see a 15 film in a cinema. 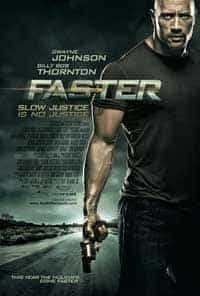 What's your score for 'Faster'?

Do you have a review or comment for 'Faster'?

This week Sony unleashed its villain movie Venom from the Spider-Man universe onto the world against Warner Bros. A Star Is Born and the black slime movie knocked it out of the park.

With a weekly gross of over $200 million Venom was far and away the biggest film of the week, but it was also one of the widest releases being released into 59 markets.

The Tom Hardy starring movie joins a long line of Marvel movies although this isn't from the Disney MCU it still has a similar look and feel, especially since the MCU has got a bit darker.

The Bradly Cooper directed and starring movie is at number 2 this week with a global gross of $55.2 million from 32 countries.

The movie also stars Lady Ga Ga and is widely being tipped for Oscar recognition so could hang around for quite a while and the positive reviews will only help as well.

Now open in 6 countries the Chinese movie takes an incredible $28 million this week to take it to number 3 on the global box office, the films total global gross is $98.5 million.

The animated family movie falls to number 4 this week and it looks like the movie might sink faster than expected. released in 58 countries it took $26.6 million this week for a $75 million total gross.

Still only available in 1 country this Chinese film takes up the number 5 position this week with an $18 million weekly global gross which takes the film to $65 million total.

Coming in with a weekend gross of $38 million it is by far the lowest grossing debut for a film in the series, a series which has corroded far faster than many other.

Expect the film to sink quite quick down the box office after this debut and potentially to be on home video by early summer.

Coming in at number 2 is the 'live action' version of Beatrix Potters classic tale of Peter Rabbit which makes its debut with $25 million openeing gross.

Another new entry makes its debut at number 3 in the shape of the Clint Eastwood directed The 15:17 To Paris which grosses $12.6 million.

Holders fill in the last 2 spots on the US box office in the shape of Jumanji: Welcome To The Jungle and The Greatest Showman.

US Box Office Weekend 27th October 2017: Jigsaw takes over for Halloween in the US

America celebrates Halloween in style and the Hollywood studios embrace this aplenty and this week the American public flocked to see the new Saw movie Jigsaw.

Bringing in a relatively low, especially for an established series, $16.2 million Jigsaw hits the top during the season when people like to be scared.

Expect the film to sink down the charts quickly as if often the case with films that rely on seasonal attraction for its return.

Boo2! A Madea Halloween from Tyler Perry falls from the top on its second weekend to number 2 with a weekend take of $10 million.

This brings the films total gross to $35 million after 2 weeks of release, this followup is falling faster than the previous film which came out exactly a year ago.

Also new this week is Thank You For Your Service which enters the US box office at number 6 with a $3.7 million opening weekend.

Longest running and highest total grossing film this week is for another week IT, the film has now taken $323.7 in total grosses and been on the box office for 8 weeks, this week it sits at 10.

US Box Office Charts Weekend 8th April 2016: The Boss is at the top

This week in the US comedy favourite Melissa McCarthy debuts at the top of the box office with her latest film The Boss.

It was a very tight fought battle with Batman v Superman but The Boss's £23.48 million was just enough to will the battle.

The Boss has been hit bad by critics and this certainly won't go down as one of the actresses better grossing film, that will probably go to her offering later in the year.

With The Boss taking over at the top Batman V Superman Daw of Justice fell to number 2, but only by $45,000, almost to close to call.

After 3 weeks the superhero film has taken $296.6 million but it is slowing down far faster than expected and hasn't been the hit most thought it might.

Highest total grossing film on the US box office, and likely its last is Deadpool with $358.4 million after 9 weeks.