Braveheart No one younger than 15 may see a 15 film in a cinema. 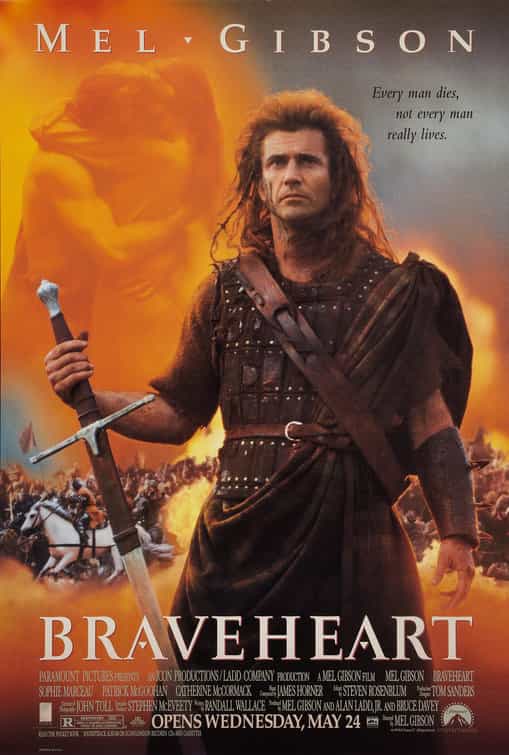 What's your score for 'Braveheart'?

Do you have a review or comment for 'Braveheart'?

This weeks top 3 is unchanged from last week meaning that the true story of an expedition to the summit of Everest is still the number one film.

It was a quiet weekend with Everest only taking £1.9 million during it's second weekend of release, this brings it's total gross after 10 days to £6.8 million.

The static top 3 means the highest new film of the week comes in at 4, Drew Barrymore and Toni Collette star the the romantic comedy Miss You Already.

Surprisingly positive reviews haven't helped the film that much and the film debuts with only £487,247.

By far the biggest total grossing film on the box office this week is Minions which just about hangs onto the top 15 and has grossed to date £46.3 million, its still not reached Despicable Me's total gross of £47 million but its not far behind.

There should be a big change in next weeks chart with Ridley Scotts The Martian opening, Robert De Niro in The Intern and a new adaptation of Macbeth with Michael Fassbender.

A year ago
Billy Elliot The Musical Live became the first event movie to go to the top of the box office, it knocked off The Boxtrolls from the top.

Five years ago
The Other Guys held onto the top of the box office with Julia Roberts vehicle Eat Pray love the top new film at 2.

Ten years ago
Pride and Prejudice retained its hold at the top while Guy Ritchies Revolver was the top new film at 2.

Fifteen years ago
Jim Carey was still a big box office star and his latest film Me Myself and Irene made its debut a the top knocking Scary Movie into second.

Twenty years ago
Apollo 13 was the top new film of the week making its debut at number 1, Braveheart fell to number 2.

Twenty five years ago
Another 48 Hrs took over at the top film while Memphis Belle felling into number 2.

This week British film Legend starring Tom Hardy crashes in at the top of the UK box office in its debut weekend of release replacing Compton after a couple of weeks.

Legend is based on the story of the Kray twins and details their rise to infamy, the film takes £5.1 million on it's debut.

Falling from the top spot to number 4 this week is Straight Outta Compton, now on its 3rd week of release it has grossed a very respectable £7.1 million.

Also new on the chart this week is Maze Runner The Scorch Trials which enters at number 2 and M. Night Shyamalan The Visit which is new at 3, this makes a whole new top 3 at the UK.

Highest grossing film on the box office this week is Inside Out which now sits at £36.8 million after 8 weeks of release.

A year ago
Boxtrolls made its debut at the top of the box office replacing Lucy which fell to number 2.

Five years ago
Resident Evil: Afterlife was the new film at the top, it replace The Last Exorcism which tumbled to number 4 after one week.

Ten years ago
The Longest Yard starring Adam Sandler took over at the top, it replaced The 40 Year Old Virgin which fell to number 2.<> Fifteen years ago
Scary Movie debuted at the top of the box office with Snatch falling into the runner up spot.

Twenty years ago
Mel Gibsons multi Oscar winning Braveheart made its debut at the top leaving Batman Forever to fall into second.