Meteor General viewing, but some scenes may be unsuitable for young children. A PG film should not unsettle a child aged around eight or older. Unaccompanied children of any age may watch, but parents are advised to consider whether the content may upset younger, or more sensitive, children. 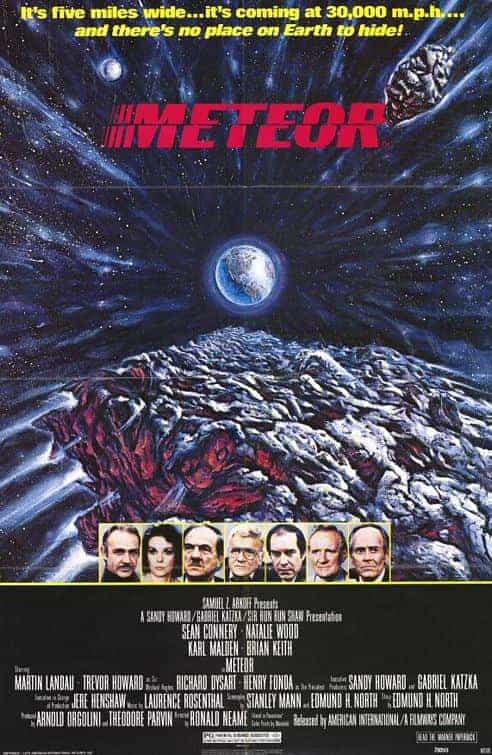 What's your score for 'Meteor'?

Do you have a review or comment for 'Meteor'?

The top 5 on the UK box office this week was almost static with The Wolf Pack leading the way in their 3rd Hangover outing.

The Hangover Part III stayed at the top for a second weekend in a row this week with no competition from any new releases meaning the only movement in the top 5 was Star Trek into Darkness climbing 1 place and The Great Gatsby dropping a place.

Longest stay in the chart this week is The Croods which is now on an 11 week run and the highest grossing film is Iron Man 3 which has to date grossed £ 36,358,709 A year ago Ridley Scott brought his new Alien film to cinemas in the shape of Prometheus which debut at the top and was hence the highest new film knocking Men in Black 3 from the top.

Five years ago the first Sex and the City movie made it's debut at the top of the UK box office knocking the fourth instalment of the Indiana Jones franchise, The Kingdom of the Chrystal Skull from the top.

Ten years ago The Matrix Reloaded was still riding the wave of expectation at the top keeping Steve Martin at bay in the runner up spot in Bringing Down the House which debuted at 2.

Fifteen year ago meteor disaster movies were all the rage and Deep Impact was still at the top while horror film Wishmaster was the highest new film at 3.

Twenty years ago Indecent Proposal was proving to be the top grossing film of May.