Watchmen No one younger than 18 may see an 18 film in a cinema. 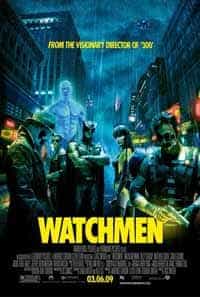 What's your score for 'Watchmen'?

Do you have a review or comment for 'Watchmen'?

All change again this week as the Aaron Paul racing film Need for Speed takes over at the top of the UK box office.

An adaptation of a popular video game, Need for Speed enters the chart at the top with a £2 million Friday - Sunday gross.

In an unusual move the Wes Anderson directed The Grand Budapest Hotel moves up one place to 2 this week taking £1.3 million over the weekend.

Last weeks top film, 300 Rise of an Empire, falls to three this week.


This time last year Oz The Great and Powerful stayed at the top of the box office while the highest new film was Welcome to the Punch.

Five years ago Wilson and Aniston starred in Marley and Me and was the highest new film entering at the top of the box office knocking Watchmen into second place.

Ten years ago Julia Roberts starred in Mona Lisa Smile entering the box office at the top knocking Along Came Polly right down to third place.

Fifteen years ago Robin Williams was starring in Patch Adams which took the top spot knocking A Bugs Life down to two.

UK Box Office Report 7th March: 300: Rise of an Empire takes over at the top

All change this week as The Logo Movie starts it's decent down the box office chart and is taken over by the slightly more adult 300 Rise of an Empire.

The sequel to 2007's 300 takes £2.7 million during it's debut weekend of release, taking over from The Lego movie which sinks just one place to number 2 this week.

Also worth a mention is The Grand Budapest Hotel which debut's at 3 this week.

This time last year Oz The Great and Powerful was the highest new film which debuted at the top knocking Wreck-It Ralph down to 3.

Five years ago Watchmen was the top film in the country which debuted at the top, in the process it knocked Slumdog Millionaire into 2nd place.