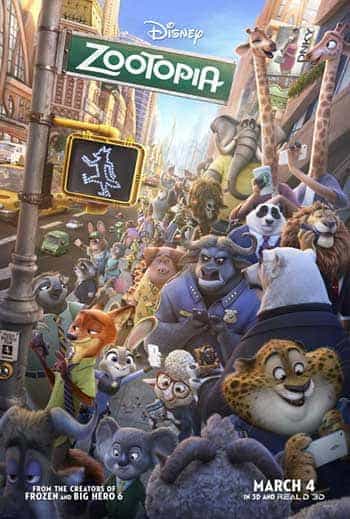 What's your score for 'Zootopia'?

Do you have a review or comment for 'Zootopia'?

The Disney film The Lion King continues to rule to global box office with a mammoth weekend gross and Chinese film Ne Zha makes its debut at number 2.

THe Disney live action remake spends its 3rd weekend on the global box office and takes $218.3 Million from 54 countries.

This pushes the films total global gross to $962.6 Million meaning the film will make it past the Billion mark next weekend. The Chinese animation hit the box office this week nad took $83.1 Million ($92.2 including previews) from just the single country.

This makes the film the highest grossing debut in China for an animated movie beating Zootopia which held the record previously.

Maverick director Quentin Tarantino brings his new film to the global box office and after good reviews scores his biggest debut to date.

The Marvel web slinger movie from Sony took $33.2 Million from 8 countries this weekend on its 5th weekend of release.

This pushes the film past the magic $1 Billion mark on the global box office and its the 9th Marvel film to do this, the third this year alone.

Finishing of the top 5 this week is the Pixar animation which take $29.2 Million from 41 countries on its 6th weekend.

The Chinese film is at number 6 this week with a total gross of $107.6 Million pushing the film past the $100 Million global mark.

Sitting at number 7 this week is the Disney live action film which this week passes the $1 Billion mark at the global box office.

Danny Boyle's Beatles homage is at number 9 this week and with a total global gross of $109.6 Million goes past the $100 Million mark at the global box office.

Top grossing films across the globe in 2016

As the year comes to a close its time to reflect on the films that hit the big time in 2016 - so what were the highest grossing film at the global box office?

The top grossing film across the globe in 2016 is Captain America: Civil War - this surprised me a bit but is testament on how well established the Marvel Cinematic Universe is now.

Compared to 2015 this is far lower than Jurassic World which took $1.6 billion but is on par with the number 2 film Fast and Furious 7 with took $1.5 billion (for the record Star Wars Episode VII: The Force Awakens took more but much of that was in 2016). Finding Dory is the second highest grossing film of 2016 with $1.027 billion while not very far behind it is Zootopia (Zootropolis) which took $1.026 billion.

Rounding out the top 5 is The Jungle Book and The Secret Life of Pets wich both took a shade under a billion each.

The top 2 films were both sequels and 6 of the top 10 films were either sequels or part of an already established franchise, and Deadpool at 7 although not part of a franchise is certainly part of the Marvel Superhero world.

Disney did very well this year with the top 4 film all being from the studio and it wouldn't surprise me if Rogue One: A Star Wars Story ended up in the top five film by the time it ends its run.

Four of the top 10 are superhero movies, four of the top ten have animals as their primary cast, 3 are animations (arguably 4) and 8 have sequels and further adventures in the series already announced. Thanks 2016 at the global box office, here is the full top 10.

Batman V Superman Dawn of Justice may have had a disappointing cinema run but when the film came out on home video it was going to hit the top.

The film was released as one of the early spring releases on 25th March 2016 where is scored a £14.6 million opening weekend and of course hit the top on its debut.

The incredible hype for the film maybe made the end product a little disappointing as the film only had a chart run of 6 weeks, sinking fast once it left the top.

The film took a UK gross of £36 million, relatively low for a superhero film, and is the 61st highest grossing movie in the UK.

Globally the film took $872.6 million, missing out on the billon mark by quite some margin, and is the 46th highest grossing film across the world.

Disney's Zootopia falls from the top where it debuted to number 2 this week.

Also new this week at number 4 is My Big Fat Greek Wedding 2, released the same weekend as Batman V Superman.

When Disney release a new video it is normally a big deal, and with the release of their spring hit Zootopia this week is is no exception and the film debuts at the top of the UK video chart.

The film was a massive hit for the Mouse House when it was released on 25th March 2016, but it did not make the top of the cinema box office, beaten by Batman V Superman Dawn of Justice.

It did bubble around the top for 4 weeks before making a slow decent down the box office spending an impressive 13 week in total in the top 15.

The film took a very nice £23 million pound in the UK which makes it the 138th top grossing movie of all time, it also took £1.02 billion globally making it the 24th highest grossing movie ever.

London Has Fallen falls from the top into second place on its second week on the chart.