25thframe.co.uk > News > The BBFC have updated the age rating symbols and guidelines in the UK - Netflix to adopt them for their streaming service

The BBFC is the independant body in the UK which governs the age rating certificates given to movies released on the UK at the cinema or on home video. 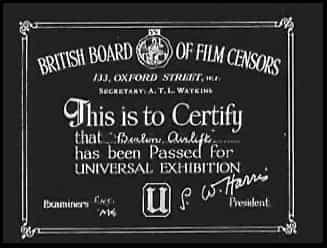 The body has been around since 1912 and has established itself as the guideline to what is suitable for viewing by what age groups.

Despite originally being just for cinema the Video Recordings Act 1984 (VRA) sat the classification turn to video cassettes as the boom on home video took off in the mid to late 80's.

We not live in a digital age where Video On Demand (VoD) and streaming services have become the norm and so the BBFC have decided to update their symbols to more reflect the digital age and they have updated their guidelines to reflect the new viewing habits.

Netflix in the UK have also decided to adopt these new guidelines so you will see the BBFC symbols and explanation of the age restriction when you log into your account after October 31st.

Our new research shows 1/3 of teens see content they’d rather avoid on a weekly basis, leaving them feeling uncomfortable or anxious. That's why we've redesigned our digital age rating symbols, to help families and teenagers view what's right for them: https://t.co/YG1UORplQS pic.twitter.com/x37TEGAyNS

The BBFC are an important body for giving parents and yourself a fair and balanced view of a movies content before watching.