Fame 2009 General viewing, but some scenes may be unsuitable for young children. A PG film should not unsettle a child aged around eight or older. Unaccompanied children of any age may watch, but parents are advised to consider whether the content may upset younger, or more sensitive, children. 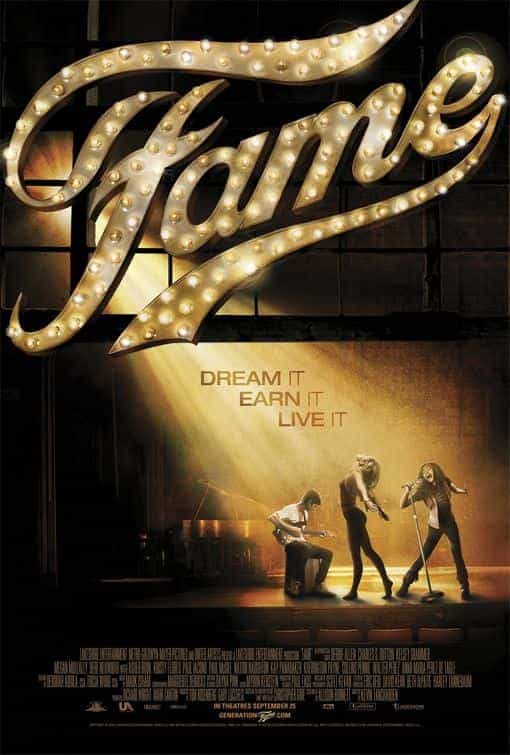 UK Box Office Figures 24th - 26th September 2021: Four weeks at the top for Shang-Chi with The Many Saints of Newark entering at 2

Superhero movie Shang-Chi and the Legend of the Ten Rings stays put at the top of the UK box office this week making it four weeks consecutively for the Marvel movie.

Highest new film of the weekend is The Sopranos prequel movie The Many Saints of Newark which makes its debut at number 2 while also inside the top 5 is documentary Oasis Knebworth 1996.

The new releases continue with the much delayed The Green Knight finally making its box office debut at number 8 with £166,118.

The UK cinema scene is starting to show signs of a total recovery and the Marvel superhero movie has to date shown that people are going back into the cinema.

This weeks the movie takes £1.5 Million at the box office which is a 34% drop over last week, this gives the movie a total UK gross of £18.2 Million.

This puts the movie at number 3 on the top movies of 2021 and will soon overtake Black Widow and Peter Rabbit 2: The Runaway to potentially be the top movie of the year, although with the release of No Time To Die this weekend it may not get there!

The Many Saints of Newark

Released as a prequel to the TV show The Sopranos the movie stars Michael Gandolfini as Tony Soprano, the role originally played by his late father James Gandolfini.

Falling to number 3 this weekend is the smash hit movie which spends its 7th weekend on the box office taking £551,195, a very slim 17% drop.

Directed by Jake Scott this documentary about the superband Oasis playing the legendary Knebworth in 1996 at the height of their fame is the top documentary at the box office in 2021.

The film takes £344,832 on its special showing in selected cinemas over the weekend.

The movie based on the life of Aretha Franklin drop to number 5 this weekend with £250,050 on its 3rd week, a 34 % drop over last weekend which gives the movie a total UK gross of £1.7 Million.

Chaos Walking is given a 12 age rating in the UK for moderate violence, threat, injury detail

Long overdue for a release the Doug Liman directed Sci-Fi movie finally gets a release in the Uk on April 2nd and is given a 12 age rating in the UK by the BBFC.

The movie stars Tom Holland of Spider-Man fame and Daisy Ridley of Star Wars fame and follow a young woman who crash lands her space ship on a planet where you can visually see the thoughts of men.

Chaos Walking is a young adult science fiction series written by novelist Patrick Ness, the first was published in 2008 and was called The Knife of Never Letting Go.

In Prentisstown, Todd has been brought up to believe that the Spackle released a germ that killed all the women and unleashed Noise on the remaining men.

After discovering a patch of silence out in the swamp, his surrogate parents immediately tell him that he has to run, leaving him with only a map of New World, a message, and many unanswered questions. He soon discovers the source of the silence: a girl, named Viola.

Bond 25 will get a title reveal April 25 at 1:10pm GMT | 5:10am PST with director and cast *UPDATE* Nothing but cast and writer revealed - all in Jamaican setting of Goldeneye

The producers of the Bond series have announced that the new Bond film, Bond 25, will get a title reveal tomorrow April 25th at an iconic Bond location.

This will presumably be the 007 stage at Pinewood studios in Ivor, near London England.

The title of the film will be revealed, although Barbara Broccoli has said it wont be the rumoured Shatterhand.

There is every possibility there will also be a poster reveal as well, although this will likely be Daniel Craig posing with a gun in a tuxedo, or some variant of that theme.

**UPDATE** During the web cast which was broadcast from Bond creator Ian Flemming's house Goldeneye in Jamaica, nothing of note was revealed other than the cast and who is writing the script, the good news there is as rumoured its Phoebe Waller-Bridge of TV's Fleabag fame which will bring a good level of humour to the film, something lacking in recent instalments.

Also of note is the inclusion of recent Oscar winner Rami Malek to the cast who will play the lead villain.

? Film begins in Jamaica
? Phoebe Waller-Bridge confirmed as a writer
? Rami Malek among the newcomers
? No title reveal yet

The week saw the release of another in the ever growing Conjuring series in the form of The Nun which managed to make its global box offie debut at number 1.

The film saw itself go to the top of the box office in many countries and globally took $131 million from 61 countries on its debut weekend.

Stil pulling in audiences is Mission:Impossible Fallout which on its seventh week of release puls in $24.4 million from 66 countries which raises the global gross to $726.2 million, the highest of the series.

Surprise hit of the summer season is Crazy Rich Asians which is at 3 this week after pulling in $19.2 million from just 24 countries for a total gross of $164.7 million.

Another big hit of the summer is at 4, The meg pulls in $17.3 million from 68 countries for the week which means the film total gross now sits at $131.5 million, its Jason Stathams biggest global hot outside the Fast And Furious franchise.

To finish off the top 5 is another new entry, Peppermint directed by Pierre Morel of taken fame takes $14.6 million from just 18 countries for a reasonable debut from a little hyped films.