Storks 2016 A U film should be suitable for audiences aged four years and over, although it is impossible to predict what might upset any particular child. 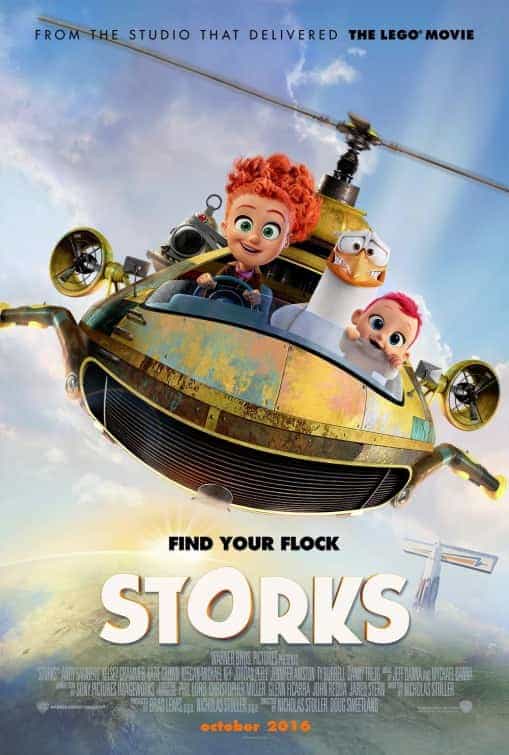 The debut of video game adaptation Assasins Creed produces the first new number one film of 2017 knocking off Rogue One: A Star Wars Story after 3 weeks at the top.

Starring Michael Fassbender as the time travelling assassin the film based on a video game debuts at the top with £5.2 million including previews.

As a star one one of the biggest movie franchises around this is by no means the highest debut gross for Fassbender, but it is good for a non franchise debut, for director Justin Kurzel it is his best grossing film to date.

Its unclear if Assassins Creed will continue to do well, it got bad reviews from the press and the audience for these films is usually front loaded so it could drop sharp in the coming weeks.

Falling from the top after 3 weeks is Rogue One although the film enjoyed a decent fourth week gross of £3.2 million which brings its total gross in the UK to £59.6.

The film wont reach the heights of The Force Awakens but this is still a great total gross, also worth a note is that the Monday - Sunday gross of £7.6 million would have put it at number 1.

Also making its debut this week is A Monster Calls at 3 with £2 million and Silence at number 4 with £1.5 million.

Rogue One is the highest total grossing film around at the moment and the longest running film this week is Storks at number 15 which has been around now for 10 weeks.

A year ago
Star Wars Episode VII: The Force Awakens made it four weeks at the top and by this point was the top grossing film in the UK ever while The Hateful Eight was the top new film at 2.

Five years ago
Mission:Impossible Ghost Protocol stayed at the top for a second weekend while Oscar winning film The Iron Lady was new at 3.

Ten years ago
Staying at the top for a second weekend was Night At The Museum while Miss Potter was the top new film at number 2.

Fifteen years ago
The Lord of The Rings: The Fellowship of The Ring stayed at the top for the new year while top new film was Behind Enemy Lines at number 3.

Twenty years ago
Evita made its debut at the top of the box office knocking 101 Dalmatians down to number 2 after 3 weeks at the top.

Twenty five years ago
Bill and Teds Bogus Journey entered the box office at the top while Curly Sue fell to number 3 after debuting at the top.

Tyler Perry keeps a grip on the top of the US box office despite some competition from Tom Hanks and Tom Cruise.

Boo! A Madea Halloween retains the number 1 position in America with a second weekend gross of $16.6 million, this brings the films total gross after 10 days of release to $52 million.

Coming in at number 2 is the third film in the Dan Brown Da Vinci Code trilogy Inferno, the film would have been expected to go to the top but Halloween was too strong a call.

Tom cruise keeps the pressure up but falls to number 3 with Jack Reacher Never Go Back, its second weekend take is $9.5 million.

Top total grossing movie on the US box office this week is Storks with $68.2 million , it is also the longest running film at 6 weeks.

US Box Office Weekend 21 October 2016: Tom Cruise is beaten to the top by Tyler Perry

At the US box office this week Tyler Perry's Boo! A Medea Halloween does the unthinkable and beats Tom Cruise in Jack Reacher Never Go Back to the top.

The Medea series has never taken off here in the UK but in America each film does well at the box office and Tyler Perry is a massive star.

Boo! goes the to the top on a very quiet weekend at the box office with a weekend gross of $27.6 million.

Falling from the top is The Accountant, now at number 3 with a weekend take of $14 million which brings the films total US gross to $47.9 million.

Also entering the chart this week is Jack Reacher Never Go Back at number 2 and Ouija Origin of Evil at number 3.

Its been a very quiet period on the US box office recently and the top total grossing film on the chart this week is Miss Peregrines Home For Peculiar Children with $74 million while the longest running film is Storks at 5 weeks.

With a new Tom Hanks film in cinemas and a Dan Brown adaptation at that it was assumed that The Girl on The Train would be a one week wonder, but Inferno was not strong enough.

Emily Blunt thus makes it 2 weeks at the top with The Girl on The Train with a second weekend gross of £3.4 million.

This brings the total gross of the film in the UK to £13.6 million, if you compare this to last years Gone Girl it is actually head of that films £9 million after 2 weeks.

Highest new entry of the week comes in at number 2 in the shape of Inferno from the book by Dan Brown and a sequel to The De Vinci Code and Angela and Demons.

Inferno makes in debut with £2.9 million which is the lowest of the series so far, The De Vinci Code and Angela and Demons made £9 million and £6 million respectively on their debuts.

Also new this week is Storks at number 3 and event movie Miss Saigon 25th Anniversary Performance which was a one off performance in Saturday night.

Longest running film this week is Finding Dory with 12 weeks, it is also the highest total grossing movie with £42 million, this is far higher that Finding Nemo even if you take inflated ticket prices into account.

A year ago
Hotel Transylvania 2 was the film making its debut at the top, it knocked The Martian down to number 2.

Five years ago
Johnny English Reborn stayed at the top for a second weekend while top new film was The Three Musketeers at number 3.

Ten years ago
The Departed went to the top of the box office after making its debut at number 2 the previous week think Open Season was the top new film.

Fifteen years ago
American Pie 2 was new at the top while Moulin Rouge slipped down to number 2 after going back to the top.

Twenty years ago
The Nutty Professor stayed at the top for a second week while top new film was Robin Williams in Jack.

Twenty five years ago
Drop Dead Fred was the new film at the top while Out For Justice fell from the top to number 6.